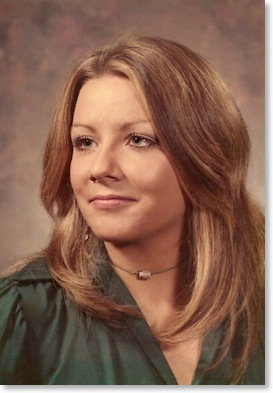 The Disappearance and Murder of Julie Ann Benning

Julia Ann ‘Julie’ Benning disappeared the day after Thanksgiving November 28, 1975 from Waverly, IA. On March March 18, 1976 her decomposed nude body was found in what some call a quiet roadside ditch in Shell Rock IA.

The autopsy showed that her death had been caused by “homicidal violence.” She had sustained injuries to her neck and throat that are similar to that of someone who had been strangled to death.

Julie was just 18 when she was murdered. I believe that she had been sexually assaulted as well, her body had been too badly decomposed for the coroner to tell that she was however.

Although the search for Julie stretched out to other states, it’s a sucker punch to learn that she was found so close to home. She was roughly 6 or so miles from Waverly. Her body had been left in a culvert all winter to decompose and washed out from the spring rains to the ditch she had been found in.

Julie was a vibrant, charismatic young woman who loved music. It’s said that she once jumped a fence to chat with The Eagles lead singer Glenn Fry. She was outgoing, fun and didn’t appear to have any enemies.

Prior to her death while she was a senior in High School she wrote a piece for the school newspaper criticizing the taking of human life and life imprisonment but police ruled that out as a motive given the amount of time that had passed since she wrote the piece. The local media boasted this point as if it had some sort of connection until folks were tired of hearing it and subsequently became numb to it.

If you are curious you should be because her murder is very similar to two other murders from the area.

Lisa Marie Peak’s body was found September 7, 1976, beaten, nude, in a ditch and about a mile from where Julie’s body had been found. She had been sexually assaulted, she to sustained injuries about the neck and throat that would point the cause of death to strangulation.

Could She Be His First

Four years prior to both Lisa and Julie’s murder June 15, 1971, the partially nude body of 14 year old Valerie Lynne Klossowsky was found under a bridge 3 miles west of Denver, IA which is about 18 or so miles from Shell Rock and about 10 or so miles from Waverly.  She had been strangled to death.

If you have read my other cases thinking things in terms of grids or roads we choose to travel which end up being a lot like a grid of some sort is important here. It’s a subconscious thing that we all do. Even Killers.

This is without any doubt what-so-ever the same killer in all three cases. The question is, what did he do before Valerie and what did he become after Julie? This killer was growing and harnessing his urges so to speak. It is highly unlikely that he did not commit a crime such as rape, attempted abduction, window peeping, etc prior to Valerie’s abduction and murder. He had a hunger that he had to satisfy. My guess is that he did in fact commit smaller less noticeable crimes up until Valerie’s murder. She was his first kill. After that, he might have either gone back to smaller crimes for a time or found a way so as to fulfill his need until that overtook him again in 1975 and he abducted and murdered Julie.

The Things That Tie

Julie and Lisa both visited a shoe store prior to eachs abduction and murder, they both enjoyed journalism, reading and writing mysteries and were both outgoing and popular. They were both abducted in broad daylight.

A prowler had been reported in Valerie’s neighborhood the night following her disappearance and on June 5.

The killer is either from Waverly, IA or near it. He knows the areas from which he abducted these young women and he knew the areas where he disposed of them rather well.

He was either close in age to each of the victims or a trusted adult within the community. Someone people knew of and felt that they could trust. The key is finding the people Valerie supposedly spoke to outside of Waverly Pool.

They may have seen the man who took her because he would have been known, someone who if someone had seen him, it would not of been out of character for him to be out and about so initially they might not have mentioned seeing him or recalling seeing him at first.

I would be very curious to see a list of potential suspects but not suspect enough to warrant a conversation with police, type of suspects. What I am seeking are trusted members of the community and/or those that were more quickly dismissed as a suspect because this murder is on that list. If the suspect ever made to the suspect list we’d need to understand why he was ruled out in the first place. I doubt he was looked at as a suspect for all three murders.

Can the Killer Be Caught After 44 Years?

That depends; is he still alive, did he ever get arrested for something where he’d have to submit his DNA sample? Our ability to get answers diminishes after 44 years unless his DNA is in a system somewhere or a family member who suspected him were to give DNA at some point.

The bottom line is this, police need to look at the suspects and those that they dismissed in this case. the suspect is right under your nose guys.

Like Loading…
Previous: The Death of Jennifer Servo
Next: December 2, 2015 The United States started the Day with only 354 mass shooting for the year We Ended it with having the 355th Mass Shooting of 2015.