Who Murdered The Town Bully?

By all accounts Ken was a drunkard, a coward, a womanizer and a bully~

He was Murdered because of who he was and this is his story. 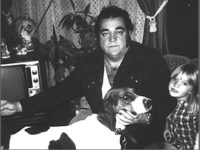 Ken is a difficult man for one to see as a victim because Ken was more or less a jerk, that’s right and not just a jerk to a few people, no, he was better known as the town bully. Still the same, that does not change the fact that he was gunned down and murdered in broad daylight, outside of his local drinking hole with a group of onlookers watching the entire episode play out. Yet to date no one has been arrested of the crime.

Now don’t get me wrong, I love to see a bad guy get his in the form of karma, but that is one thing, it is an entirely a different matter when one, two or several engage in vigilantism under the guise of “protecting” themselves after the sheriff drove out of town minutes prior after having told the town folk not to engage the man. In fact, if memory serves me here, vigilantism is highly frowned upon by both law enforcement and the judicial system not to mention that whoever the individuals are that are responsible, sank to Ken’s level the very moment they pulled those triggers and murdered him.

They essentially became in that moment in time no better than any other murderer.

What type of man was Ken?

Ken was the 15th of 16 children born into a poor, family of migrant farmers. They had moved between Kansas and the Ozarks finally settling outside of Skidmore. Ken was not an educated man, he dropped out of school at 15 while in 8th grade. He was known locally as a raccoon hunter, cattle rustler, small-time thief and womanizer and as the town bully. Reports state that for well over 2 decades, Ken was suspected of being involved in theft of a multitude of things such as grain and other goods, yet he avoided conviction when charges were brought against him…. 21 times.

How could that be? Well apparently witnesses refused to testify because he allegedly intimidated them. He would follow his targets or park outside of their homes and stalk them.

Ken was the father to more than 10 children with different women, he met his last wife, Trena McCloud, when she was 12 years old and in eighth grade. She became pregnant when she was 14, dropped out of school in the ninth grade, and went to live with Ken and his 3rd wife Alice. Ken even went as far as to divorce Alice and get married to Trena in order to escape the charge of statutory rape .

16 days after Trena gave birth and both she and Alice fled to Trena’s mother’s and stepfather’s house. Here’s where it gets sticky. According to court records, Ken figured out where she fled to , went after them and brought them back. He then returned to Trena’s parents’ home when they were away, shot the family dog, and burned down the house.

As you can see it is difficult to try to see him as a victim. The fact remains, he ended up as one.

Ken was indicted for statutory rape, the burning down of Trena’s parents home and assault.  Ken was rightfully so, arrested, booked, arraigned and released on $2,500 bail. Trena and her baby were placed in foster care at a home in Missouri.

To make matters worse, it was reported that Ken sat outside the foster home for hours at a time, watching them, he even went as far as to approach the foster family and make the offer of a trade “girl for girl” to get Trena and his child back. Ken laced his offer with the threat that he knew where the foster family’s biological daughter went to school as well as what bus route she rode. Obviously additional charges were filed against Ken.

In July of 1976,  local farmer Romaine Henry said that Ken shot him twice with a shotgun after Henry became upset with Ken for shooting weapons on Henry’s property. Ken was charged with assault with intent to kill. Of course Ken denied that he was at the scene. In a shocking twist the case dragged out without a court date, while Henry reported that Ken McElroy had parked outside his home at least 100 times.

Finally, when the trial did move forward, 2 raccoon hunters testified that they were with Ken the day of the shooting in another location that surprisingly was not on Henry’s property at all. Henry was forced to admit in court, under questioning by Ken’s attorney, that he had concealed his own petty criminal conviction from more than 30 years previous.  Ken was subsequently acquitted of the crime.

Skip forward to 1980, apparently one of Ken’s children had gotten into an altercation with a store clerk by the name of Evelyn Sumy at a local grocery store that was owned by Ernest “Bo” Bowenkamp. The story told was that a younger McElroy child tried to steal some candy.

That didn’t go over well with Ken so, he resorted to stalking the Bowenkamp family, and eventually threatened Bo Bowenkamp in the back of his store with a shotgun in hand. At some point during the verbal altercation, Ken shot Bo Bowenkamp in the neck but Bo survived and Ken was arrested and charged with attempted murder.

Ken was convicted at trial of assault, but freed on bail pending his appeal. Immediately after being released at a post-trial hearing, Ken went to the D&G Tavern, a local bar, with a rifle, and made graphic threats about what he would do to Mr. Bowenkamp. This led to several patrons deciding to see what they could legally do to prevent McElroy from harming anyone else. Nodaway County Sheriff Dan Estes suggested they form a neighborhood watch.

Trust me I hear you all thinking Ken is a real A-hole who got what he deserved. I feel you, yet two wrongs never at any time made a single right.

During the meeting, Kem went the D&G Tavern with Trena for some drinks and while they enjoyed drinks at the bar, word somehow got back to the men at the Legion Hall that he was at the bar. Sheriff Estes told the assembled group not to get in a direct confrontation with Ken, he advised them to instead seriously consider forming a neighborhood watch program.

After that, sheriff Estes drove out of town in his police cruiser and the citizens decided to just disregard what sheriff Estes asked them to do and instead head to the tavern as a mob.

They filled the bar completely, in an effort to intimidate Ken and chase him off. Ken finished his drinks then purchased a six pack of beer, left the bar, and got into his truck.

While Ken was sitting in his truck he was shot at several times being hit twice, once by a center fire rifle and once by a .22 rifle.

The police had 46 potential witnesses to the shooting, including Trena, who by the way was in the truck with her husband when he was shot. No one bothered to call for an ambulance, not a single soul. Trena claimed to identify a gunman and every other witness either was unable to name an assailant or claimed not to have seen who fired the fatal shots.The DA declined to press charges, and who would he have filed them against, the towns lips were sealed. The only person talking was Trena and she was pretty much ignored. To top it off not even a  Federal investigation lead to any charges.

In July of 1984, Trena did file a $6 million wrongful death lawsuit against the Town of Skidmore, County of Nodaway, which included the major players; Sheriff Danny Estes, Steve Peters (the then Mayor of Skidmore), and Del Clement the man Trena accused of being the shooter, but who was never charged. The case was later settled out of court by all parties for the sum of $17,600, with no one admitting guilt, in an effort to avoid costly legal fees should the case move forward.

With 46 potential witnesses, a bar that had been filled to capacity with angry townspeople, a wife sitting in Ken’s truck, right next to him, I find it highly unlikely that the shooters could not have been found. I know gun records weren’t what they are now, but…small town and all everyone knows everyone else’s business so to speak. Not to mention the best witness they had was Trena who was right next to Ken watching everything, she didn’t get hit which indicates the shooter was pretty damn close.

Of course for the murder of Ken to be solved it would have to be investigated by someone who actually cared that regardless of who Ken was, he was murdered. Rather than heed the advice of the sheriff, the town became an angry mob who elected to snuff out a man’s life under the pretense of “protecting themselves” from him rather than utilize the system in their favor.

Could the case be solved today?

That depends on what if any evidence was collected and if proper interviews were conducted. The shooter (s) and key witnesses could also be dead at this point, thus having carried the secret with them to the grave.