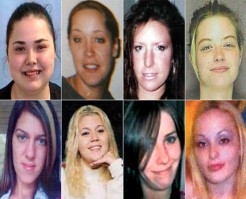 The Long Island Serial Killer, also known as the Craigslist Ripper and the Gilgo Beach Killer, what happened to him or them? The killing seemingly stopped yet could have gone on for around 20 years based off of the forensic analysis on some of the recovered victims. It is believed the killer murdered and disposed of 10-17 individuals who were associated with the sex trade.

On May 9, 2011, authorities surmised that 2 of the newest sets of remains might be the work of a second killer. On November 29, 2011, however, the police announced that they believe that one person is responsible for all 10 deaths and that they did not believe that the case of Shannan Gilbert, an escort who was missing when the first set of bodies were found, was related.

The first body that was found were the skeletal remains of a woman in a nearly disintegrated burlap sack. Bodies seemed to stack up after that. All disposed of in the same fashion, they appeared to have been killed the same way.

So who was the Long Island Killer?

I personally find it highly doubtful that the killer stayed in or near New York after 2010 when victims started being found, in fact if investigators are correct and I believe them to be, this person or the person’s were heavily involved in an organized crime syndicate, this person’s primary function within the organization was to rid it of “problems” because for a time, this person was quite good at doing just that. If the killer stayed in that area, he retired.

The type of organized crime syndicate would be sex trafficking or a very highly organized sex trade criminal organization. It’s not just a pimp who has a large group of girls who work for him while he cruises around in a pimped out El Camino like on TV, it is a criminal organization that is highly organized, sophisticated and profitable. They were and possibly still are involved with both the sex trade and drugs. The two do go hand in hand after all and they have other ways of making money as well.

This particular killer displays the exact killing and disposal traits of someone who is involved with organized crime. The killer planned the murder and disposals meticulously to a degree. The disposal could have been a little cleaner which tells me clearly that this organized crime group is not all that concerned with the killer’s identity being discovered.

That does not mean they don’t care if the killer is caught, it tells me that his particular organized crime group is very confident the killer’s identity will not be discovered by law enforcement. To be clear, this is not someone who just likes killing and takes measures to not get caught because he gets off on killing.

Killing is this person’s job function, he doesn’t get off on it like most serial killers. Don’t get me wrong, he enjoys it, he just does’t fit into the box or idealization of what most think a serial killer is. Serial Killers like Ted Bundy and individuals who kill multiple individuals while working in organized crime groups are two very different types of serial killers.

It is important to remember that sex trafficking while you hear about it all the time now, back in 2010 and prior was not a dinner table conversation if you will, yet it was happening then. It’s been going on a lot longer than many know or believe.

That may more than likely mean this organized crime syndicate had been in operation in the mid to late 90’s, flying under the radar until 2010 when bodies started being discovered. I believe this killer is part of a larger organized crime group that may be operating in multiple states as well as in other countries.

Years ago I met with a man who was Slavic who claimed that he was part of Interpol prior to obtaining his US citizenship. He told my friend and I that he was forced to come to America because his Government had to hide him in the US so under some sort of agreement between the US and his Government he had been given a new college education and allowed to become an American Citizen and obtain work in a hospital. He explained that he had been given a brand new identity because of some pretty important intel he had on the Russian Mafia that could also tie in criminal activity to the Russian Government.  Yes, I know what a load right, I mean it was clear he wanted to pick up on either myself or my friend I was out with, so he had to be interesting.

Idiot, he failed to educate himself in the knowledge that many American Women, love a man with a foreign accent.  No need for some made up story to go along with it. What intrigued me about him was his familiarity with the sex trade, sex and human trafficking, in particular what type of young girls/women they acquire, how they were either drugged and made to participate or were active players, how they were treated, and if they became a problem how they were dealt with.  He was especially well educated about how organized crime groups who operated in and around Russia and Poland.  He appeared to be extremely knowledgeable about it, a little too knowledgeable.

Many of the Long Island Serial Killer’s victims fit the profile of the women the man spoke of. That does not mean the crime organization is Slavic in nature because after looking at the trafficking industry most groups have a type that they acquire and most are organized and operate in the same fashion.

So Much Time Has Passed….

That we know of.

We don’t know if the killer is killing again, still or if he has retired, if that criminal organization has moved on, up or away. If it were me, the key to finding this killer is through the FBI, DEA, ICE and maybe involve the Bureau of Alcohol, Tobacco, Firearms and Explosives.

The FBI, who recently decided to have a look at this case,  may have information about an organized crime group known to have operated during the 90’s – 2010 in that area, or elsewhere, the other agencies may have investigated a crime group for crimes other than the sex trade or trafficking, but upon a second or third look realize they looked at this group and will be able to provide information to the FBI about the group.

The organized crime group is most likely still operational, finding that group may be the key to finding The Long Island Serial Killer.