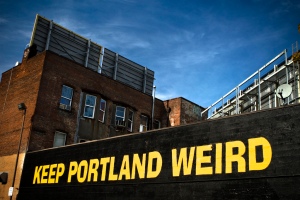 Not a headline you see often but it is worth a mention because it does illustrate how concerns through the ranks can potentially grow into a nightmare for any police organization.

Portland, Oregon. I love everything about Portland in fact my list of dislikes are much shorter than my list of likes and would take far less time to cover.

At any rate two of the Portland police union presidents have stated rather publicly that they feel that internal affairs captain Derek Rodrigues should be transferred for not following bureau protocol and initiating an investigation of Chief Larry O’Dea’s off-duty shooting of a friend.

That incident and I know this may come as a shock to you being that it involved an off duty police officer…happened to be a shooting that occurred while Chief O’Dea was off duty where he maybe sort of in a subtle drunken not thinking clearly way, claimed that his friend had somehow shot himself in the lower back.

The union’s claim that Capt. Rodrigues failed to follow basic procedures that were specifically put in place to ensure accountability and integrity.

Great, what the hell does that mean right? What is means is simply that Capt Rodrigues failed to conduct the investigation in such a way that it followed proper procedure.

On 4/21/16 Chief O’Dea, while off duty decided to partake in a few drinks with a “Friend” and play with a “Loaded Gun.” After that, while He smelled of alcohol he told a Harney County sheriff’s deputy that his friend appeared to have shot himself in the lower back “accidentally,” according to the deputy’s report. But… Chief O’Dea at some point later decided to apologize to his wounded friend for having shot him with his .22-caliber rifle.

Last but not least, best not to forget this minor detail, Chief O’Dea later told the mayor that he had accidentally shot his friend.

Chief O’Dea was placed on paid administrative leave pending a criminal investigation as of 5/24/16.

In all reality, this was most likely was a combination of drinking and really piss poor judgement, that I believe we can all agree on.

Chief O’Dea never technically told investigating officers that he was the man who shot his friend, he was also drinking and shooting road kill with 6 other individuals who were also camping at the same time. Sad yet true.

The Union also has had a few issues with Capt. Rodrigues before where the police internal affairs captain somehow and in some way, on occasion has reversed police commanders rulings that exonerated officers for alleged misconduct.

Walk into any police department and ask them about IA. They don’t typically dig IA and for good reason. From the general public I always without fail hear that IA protects it own and fails to look into claims of police misconduct. From the police I always hear that IA overstepped its boundaries and failed to conduct a proper investigation which is precisely why more and more departments are utilizing citizen oversight.

At the end of the day, do I personally believe that O’Dea should be charged with at least lying to police, I believe technically that is called false reporting…at any rate, yes he lied and should be held accountable for that, he did not intentionally set out to kill someone.

Should he lose his job? No. He did not set out to shoot and kill someone, remember, I keep saying this, police are just like the rest of us, they mess up too from time to time. It’s ok. They mess up big or small, they are human beings and we need to stop viewing them as some superheroes who never fuck up or make a mistake, sober or not.

At the same time, why was O’Dea questioned and allowed to give a statement by investigating officers while intoxicated? The initial statement noted that they could smell alcohol on him. He was camping, I am pretty sure the guy didn’t have like a couple of beers…it’s camping folks.

Here is the reason citizen oversight works when done right. Your everyday average Joe like me, we tend to see the whole story not part of it. We also tend to see things in a very human being sort of way. I get camping and drinking, I also get that the guy’s statement should have been taken after he had sobered up, where he might have been given a better opportunity to be honest. Drunks or someone who is buzzed, are not well known for being able to think clearly, not panic and or be honest when in fear of losing one’s job. Hence they panic.

Personally, Capt. Rodrigues is the biggest concern of all because he clearly has an agenda and it’s not doing what is right or fair.

Yes, O’Dea is guilty of lying and poor judgement. It happens. Rodrigues on the other hand, seems to be throwing his weight around and he needs to be promptly put into his place for it. Any time you have IA influencing Citizen Oversight, your department is at risk, your community is at risk, your officers are at risk.

When Investigations into police misconduct are no longer fair and are done improperly, it throws the entire idea of IA and Citizen Oversight into question.

Never mix blood with water and that is precisely what Captain Derek Rodrigues has been able to accomplish in my beloved Portland.

IOS users can find The Crime Shop on Apple News.