On Thursday June 23, 2016 the citizens of the United Kingdom head to the polls to vote on whether or not they should leave the European Union.

This vote has been coined Brexit throughout the world.

To give you an idea if you don’t already know, the European Union is an economic and political partnership between 28 member nations that are committed to the prosperity of the region as a whole.

Britain joined the European Economic Community, which was later absorbed into the European Union in 1973 and has been a valuable contributing member since.

The European Union or Establishment if you will grew out of 3 communities that were founded after World War II to establish peace and prosperity in Europe.

The most important treaty however is the Treaty of Rome. Rome created the European Economic Community in 1957.

The European Union focuses on:

The European Union is run by the following 5 main institutions:

So the United Kingdom leaving the European Union not only impacts the UK’s citizens but it impacts the union as a whole.

No matter which side you are on it really is anyone’s guess as to how it might end up should the United Kingdom leave the European Union.

One argument or example if you will as to why anyone would want to leave the European Union is, and this should not surprise anyone that each member nation must pay into the union on a monthly basis.

The argument to leave the union does seem to be gaining at least for the most part the majority of media attention at least here in the US if you have seen it or heard it on the news and followed it.

That was until last week of course. Last week a man fatally shot and stabbed a member of Parliament, Jo Cox who supported staying in the European Union. The man shouted the words “My name is death to traitors,” while he committed his crime.

Those on the side of leaving the European Union have said this is necessary to protect and/or restore the country’s identity, it’s culture, independence and place in the world.

As one can imagine this side also opposes immigration and uses the above to express how they feel about immigration.

Not much different from the US however, the debate over whether or not to leave the European Union cuts along the country’s financial classes.

Supporters of leaving are largely those that are not as financially well off as the supporters who want stay in the union.

It has been said that the “Brexit” has seemingly stemmed from a sense of lower wage earners feeling abandoned. The debate has become the perfect vessel for the anti-establishment, anti-elite movements across the United Kingdom. In other words, the lower financial classes see this break as hope.

The funniest part of all of this is that neither side is defending the European Union at all. They are not saying that it’s done much for them, they don’t seem to feel that it is admirable let alone meaningful to them.

According to Brian Klass, Britain feels it has lost it’s place in the world because they have to consult with Brussels before doing anything.

Britain also feels that due to immigration, it is losing its cultural and national identities. In 2013 a British Social Attitudes survey concluded that more than three-quarters of Britons wanted the country’s immigration policies reduced and around 56% wanted it reduced “a lot.”

Some are also saying that the sense is that Britain has lost something, or rather that it has lost sovereignty.

In short, Britain cannot close her borders in the way they’d like to.

Then again you have those that feel leaving would spell disaster to the economy. What’s key to this argument is that quite a few economists agree with that. Europe is Britain’s most important export market as well as its most important source of foreign investment. Topping that off is the fact that union membership has been a critical tool for establishing London as a global financial center.

Leaving the European Union puts that in jeopardy to the point that it could come crashing down.

Supporters of leaving still feel that the United Kingdom can support itself and still manage those long standing relationships past a break from the Union and come out in stable if not better condition.

Britain has always sort of felt aloof from Europe in sort of an alien kind of way. Britain has pretty much felt above most of Europe if you will.

So it’s anyone’s guess as to what might happen exactly, should the United Kingdom leave the European Union.

In the short term, it’ll most likely hurt them financially because without the access they have while in the union to the open markets, Britain might lose trade and investment, not to mention that should they leave, they wanted immigration cut back so they would lose that work force. Which leads to slower economic growth due to lower productivity.

One must also consider this, Scotland’s first minister Nicola Sturgeon said that should Britain leave the European Union she will hold a referendum so the Scots could vote to exit Britain and rejoin the European Union as independent nation.

Scotland has tried this before back in 14 and it was unsuccessful, this go around however it might be very successful because the majority of Scotland supports being in the European Union.

Lastly, should a Brexit occur, it can cause a destabilization economically that it could affect us here in the US. 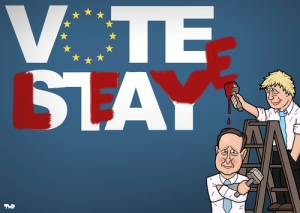 At the end of the day no one can say for sure what a Brexit could mean to the world. The only two things for sure here are that, on this eve I’ll go to bed while voters are voting to leave the European Union.

Regardless of how the vote turns out, this will forever change the relationships and trust the United Kingdom had with the other states within the European Union.