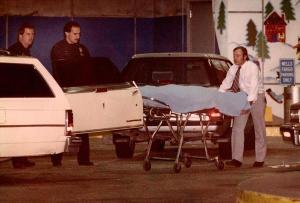 Four guards were found dead while the tellers were left alive.

While the 4 guards were on duty that Sunday, 6 employee’s were in the cash counting room counting the cash. Around 9:14ish am someone called claiming to be the bank’s VP and asked for entry into the building through a side freight elevator. The caller was calling from what is described as a street level phone.

Doing his job, senior guard William McCulom took the elevator up to meet the caller from where the call originated. Once the doors opened, William was held against his will so that the caller could gain entry to the subbasement. Once the caller had entry, he murdered William, took his access card, then hid his body in a storage room and proceeded on.

The killer wound his way up to the guard station, which is located on the basement level of the building, it also held the vault.

At some point around 9:20am the killer set off an alarm on one of the stairwells but no one seemed to notice or simply ignored it thinking perhaps that is was William.

Once on the basement level, the killer first hit the guard room where he encountered  Phillip Mankoff and Scott McCarthy. He forced them into the battery room and shot them dead. It is believed that Todd Wilson was somewhere else on that level during the killing of Phillip and Scott and either came to their aid or simply returned from wherever it was he happened to be and was shot several feet away from the battery room.

In all, the killer fired a total of 18 shots.

The killer entered the vault at 9:48am according to electronic records from the bank and demanded that the employees cover their eyes and lie on the floor.

The killer then ordered the senior vault manager, David Barranco, to fill a satchel with cash from the work stations.

The killer forced the tellers to crawl into a small room near the vault known as a man trap.

A man trap is basically  a small space with two sets of interlocking doors, which require the first set of doors to be closed before the second set opens.

For a manual mantrap, a guard would lock and unlock each door in sequence. A video camera and intercom are often used to allow the guard to control the trap from a remote location.

It is believed that in an effort to confuse investigators, the killer did not fill up the entire bag with money and he did not take any bundles of cash from the vault. The killer cleared the building at 9:56 a.m. leaving the tellers locked in the man trap.

The tellers found a broken spoon on the man trap’s door sill and freed themselves approximately 20 minutes after the robbery.

One James King who has since died. What is interesting about James is that he at the time was a former Denver police sergeant and United Bank of Denver security guard.

Being a Denver native, I can tell you everyone in town thought that investigators had the right guy because of the local media, but now that I am older and wiser I think that was a knee jerk reaction.

Not that I doubt the evidence or that investigators had the wrong guy, I don’t believe he acted entirely alone and the money, well it was never found or spent by James and that speaks volumes.

James was arrested a month later for the crime and acquitted because the jury felt the prosecution’s evidence was circumstantial at best. The reality is, as little as the DA had, in today’s world the DA actually might have had a better chance at winning.

James was identified by some of the bank employee’s, who also I might note couldn’t tell the difference between actor Harrison Ford and the robber as the defense proved…Jame later admitted to shaving his mustache after the robbery and perhaps the two most damning pieces of evidence are that he owned a .38-caliber Colt Trooper, the weapon used in the murder/robbery and the 17 bullets taken from the bodies of the bank guards were from four or five separate brands.

Once upon a time a little known fact, back in the day the ammo given to Denver officers, would be put into what is known as “ammo buckets.”  As you can imagine, over time when the department bought different brands of rounds the cartridges would get mixed together. Thus when the officers loaded their guns, they would have a mixture of brands.

Here’s the thinking with that and the DA and investigators are pretty right on this, a normal killer/robber is going to take his ammo from one box, i.e. the same brand  of each round that he loaded into the weapon. Most people simply, criminal or not don’t reach into a “bucket” of ammo they have laying around.  Unless of course you know the cops MO in that city and can mimic it.

But was James really the guy?

I am curious as to why the guards were killed and the tellers were not? That seems to be a key piece of intel we have yet to explore.

Additionally, it is way too much of coincidence the tellers just happened to find a spoon in the man trap. If I know anything about banks and it’s a lot,  paperclips, paper, pens, pencils, spoons, just don’t get left lying around, pretty much anywhere, including in the man trap.

One could legitimately argue that a bank is cleaner than a hospital save for the germs left on cash brought to the bank to deposit. That is hands down.

The FBI through the years did keep an eye on James and they didn’t see a whole lot in the way of him spending the missing cash which was reported to be close to or right at $200K.

The reality is that yes, he could have spent it slowly over time but what’s more likely is that he isn’t the individual that ended up with the cash.

Additionally, The former head of bank security, James Prado has always believed that due to security changes that came after James King was employed with the bank, that the killer was a at the time a currently employed guard and maybe not James King.

According to James Prado, one of the security measures that were put into place at the time the robbery/murders occurred ensured that anyone unknown to the guards would be placed in a security man trap when he tried to leave the bank.

How that happens when all of the guards are dead is not known by me, that is for sure. But he is pretty sure of that fact.

Regardless, that implies that some other form of technology or security plan the FBI and DPD either ignored, didn’t find or simply missed is still out and about for the world to find.

In the end two key elements which are basic have been glossed over. All of the guards were killed, which means the killer and the guards knew one another, while the tellers were all left alive, in a man trap they could have died in for all we know, save for the spoon they somehow found which gave them the ability to escape. Which is an unusual chance encounter if you will.

Regardless of the main suspect in this case being dead now, I believe the answers the FBI and police seek lie in the evidence that was left behind but not fully explored to the fullest. The dead guards, the spoon, and the tellers who survived.

It’s obvious that if you go to rob a bank and know you are going to kills the guards, you might encounter the type of person who is a life saver, hence one of the tellers or two of them try to stop you and you have to kill them, yet only 18 rounds were fired.

In such a sophisticated robbery which was as the evidence shows was well planned out, tapes were taken, guard books were taken, prints wiped, you would certainly take more than 18 rounds, you’d kill more than just 4 guards and  you sure in the hell would make sure that a teller was never going to be able to point the blame to you.

What is clear is that this guy knew his odds better than the odds knew him. He only intended on killing the guards, for a reason. And for a reason he left the tellers alive with a way to escape.

So what about James King then?

Well, he did get rid of his gun, which he freely admitted. What we really have to look at since the FBI couldn’t ever catch him spending the missing cash, is what would he have had to gain from murdering guards he may not have known since he was not employed by the bank any longer and why rob the bank. What did he have going on that might have prompted him to go to that length?

James was not the bank robber type as far anyone knew. He had a wife that stood by him until she died, that is a telling tale and to understand it, I’d strongly suggest you find his son and ask him.

The reality is, he didn’t end up with the cash but someone did. That someone was tied to the bank in some way, whether it was a teller, a guard or someone that any one of them owed money to, a sick family member, etc, the point is, not one of them specifically ended up with all of the cash. You know a rather large sum…of cash, to spend…

Of course someone could have gone Good Fella’s and made sure to spend the money slowly and over time on stuff no one would notice or on stuff that wouldn’t raise suspicions.

The point is simple, that arresting one man a month after the crime and putting him on trial for it tells me that not all of the evidence was examined carefully and that while he may have had a part in the crime, he was never alone and that means that his secrets didn’t exactly follow him to the grave.

As James Prado put it, even if the real killer or some accomplice were found it would be easy for them to point the blame right back at James King.

If it were me, I’d go back over every detail, every detail and any surviving witnesses still, well they could expect another interview.

A reason does exist for every little thing we humans do, even if it does not seem like it. The tellers were left living for a reason to the killer. The trick is figuring out that reason. The guards being killed are easy to figure out, the former is not.

This investigation is worthy of a do over without focusing on anyone person. It’s worthy of seeing the actual evidence and looking at for the first time. Something I don’t believe investigators or the FBI ever did.

IOS user? Well you are in luck you can find The Crime Shop on Apple News

Also give a shout out to my fuel supply, deathwishcoffee.com