Black Lives Matter Movement is out of control 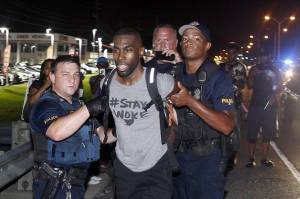 Was it ever in control?

This past weekend several media outlets reported on the Black Lives Matter protesters getting out of control during protests across the US. I just saw a news clip out of St, Paul telling viewers that an officer has suffered serious spinal injuries because protesters dropped a cinder block on the officer’s head?!?!?

Are you kidding me? Not even a week after 5 officers were gunned down and killed in Dallas, TX some folks thought it would be a good idea to drop a cinder block on an officer’s head?

The leaders of this movement need to reign it in before the message gets lost.

The media was camped out at the hospital while hospital workers made a line blocking the media from actually filming the bodies of the officers being removed from the hospital.

The media is so goddamned classless they can’t even give the fellow officers, families, loved one’s or hospital any breathing room, while they try to broadcast live on TV the dead, lifeless bodies of the officers being wheeled out on a gurney and loaded up for the morgue.

Is that what we American viewers want to see broadcast whilst eating breakfast? The bodies of dead police being wheeled out to an awaiting vehicle?

Wouldn’t mainstream media be happier if they were allowed into the morgue to film the autopsy for all of us to see on live TV?

I was horrified to see the news about Dallas, my heart sank.  I was also horrified by the coverage by our media industry and I was disgusted by the lack of decency. They reminded me rabid dogs in the wild.

Two men were shot and killed by police last week, two African American men which is why the Black Lives Matter movement was protesting at the time of the shooting in Dallas.

So getting back to being fair, I did not see 4 hours of solid coverage of either of those two shootings and quite frankly that is part of the problem.

The movement feels unheard so in order to get heard, they become destructive and out of control in some cases. It matters not that the movements leaders ask that protesters remain peaceful, the followers want to be heard and when they feel unheard, they get out of control.

Some members of the movement see that a black man just shot 5 officers as everyone saw on TV nonstop for 24 hours the day after. That member then gets an idea.. If we want to bring attention to our cause, I have to do something risky in order to get it otherwise the media is not going to cover it.

As we have seen with every mass shooting in this country, they get bigger, bolder and dirtier. The reason’s get crazier, the shooters get crazier, and the reason why they did it get’s lost thanks to every live news broadcast on TV.

The media is as equally out of control and out of hand with its thirst for violence. I mean nonstop man, 24/7 the Dallas shooter is in the news, his picture, his name, this headline from Business Insider “The Dallas shooter was ‘ostracized’ by black power groups before he opened fire on police officers in Dallas.”

“Black” power groups. Again, I’ve said this before too, why do we always feel the need to highlight “black”  rather than just “power” group? By using words that lean towards racial division, we instill it into the reader’s mind.

The media released details about his military service, an image of a social media account he had was online the day after the shooting as the media was so thirsty for anything they could find out about the guy.

I’ve said this before as well, it is not the media’s job to investigate these types of situations and bring us the details until law enforcement is ready to release it.

I’ve hinted at this in my past pieces about the Ferguson Effect, the media should be held accountable for some of this violence because of the way they report it.

Countless headlines keep popping up about why the guy did it and the media is bringing in experts, blaming the cops, blaming things like radicalization, the Black Lives Matter Movement…let’s be honest and call it like it is.

Maybe the man felt alone, he wanted to be part of something, he felt held down, held back, he wasn’t getting anywhere with his life, finding a job that’ll cover the bills is not easy these days for anyone.

Maybe he was discriminated against not only for being black but because maybe being in the military messed with him mentally a little bit and no one would hire him. Yes employers do that, they just choose not to report that they do. Maybe he had a run in with police and he was angry about that, maybe he had a fine that he was upset about…

A lot of times when someone get’s to a breaking point, they will try to be part of a group that will help provide basic necessities for them, or bring them much needed resources, such as living expenses, food, even if that group is a radical one. When even that doesn’t work, well this is exactly how it turns out.

The goal of law enforcement is always to understand why, to get to that goal investigators go through the person’s life very carefully not in the course of a newscast or two or just a quick look at his social media. Investigations take so long because investigators actually investigate not grasp at any meat on the bone they can get to.

At least investigators make the effort to the understand the person and the why so they can better prevent shootings like this in the future. I am not even sure what in the hell the media is trying to do. All I know is that by the time investigators usually release the details as to why no one is listening any longer because the media painted the picture for us, the way they wanted to.

Someone should reign those guys in…while we are at it.

I have also seen countless headlines that are really divided about whether or not our country is divided by racism or even if we have a problem with racism.  Even social media is deeply divided.

So should BLM just get over it then?

The Black Lives Matter Movement provides a venue for those that are fed up, but because of the movements lack of control over its own protests, the movement provides a venue to those who are willing to behave violently just to get the point across. They are providing the perfect storm for those seeking to cause violence, kill or harm police and in general aren’t at the protest in an effort to make things better or so that they can be part of making sure the world hears the movements cause.

Things like blocking traffic on major roadways, impeding the passage of pedestrians trying to get somewhere safely, bringing guns to protests, dropping cinder blocks on the heads of our police, shooting our police, do not fall under the category of a peaceful protests.

Protesters are better served if they direct the protests to the appropriate parties, not interfering with the public’s right or ability to get to and from on major roadways or walkways.

By that I mean, a protest held at that cities capital, state building and the like, instead of interfering with the general public’s ability to travel by car or foot. That just makes the public decline to support your cause because you are causing problems.

So is the Black Lives Matter Movement out of control?

I’m not sure it ever was in control, it’s always been riddled with rioting and violent behavior. They seem to think that the general public has to hear their message and the message isn’t even clear.

Saying things like “Stop Shooting Unarmed African American Men” while some of those of those men were shot while committing a crime and failing to do as police instructed, well most people feel the shooting was justified and not racially motivated. That is because BLM has not provided any facts to say that it was.

So the message becomes lost because while BLM and it’s supporters want you to believe most police shootings of African American males are racially motivated, the statistics simply and undeniably never have supported that. To be honest, when you are asked to comply with orders from a police officer and fail to do that, you could potentially escalate the situation to the point where someone gets shot. Black, white, whatever race.

Before anyone starts, we could argue that all day long because anyone can get google gun stats and police shooting stats all day until they find the one they want to use.

I get mine from the FBI because I enjoy things like drinking coffee, if I google searched the stats on officer involved shootings I’d have less time to make (I use a press) and then enjoy a delicious cup or two or more of coffee.

So in short no I do not believe that BLM ever had control, it’s message was never clear. They tried to raise awareness about officers shooting unarmed individuals and went about it by saying race had something to do with it. It didn’t. Cops shoot unarmed individuals of every race.

The leaders of BLM went about this whole idea the wrong way and lost complete control of it, which is exactly why no one listens to it. The point that they tried to get across is that black’s are more likely to get arrested, pulled over, serve longer sentences than whites. But clearly from the protests I have seen they centered the efforts around black males who were shot, some of which were shot while breaking the law, not complying with police orders, reaching for a gun or what appeared to be a gun after the situation had escalated.

The point is, the reason people don’t respect or believe in BLM is because they have centered around individuals who were caught behaving badly. IF the individuals had not been, well the outcome would have been different.

All save for the media, they love reporting on the violence so that keeps the movement alive at least.

If it were me and thankfully it’s not, I’d scrap the movement or get my ass in gear and save it. Until then the police are now leary and untrusting of these large scale protests, who could blame them if they overreact then and whatever message, well it will get further lost.

Again, I’ve said this before in my Ferguson pieces, cops are less racist than BLM makes them out to be. Racism in this country is being perpetuated by it’s citizens, the media and movements like Black Lives Matter.

While it racism is alive and well, so are other discrimination’s against others and they all deserve attention.

I see this all over social media, “All Lives Matter.” Until we decide to understand that we will always be divided.
Cristal M Clark