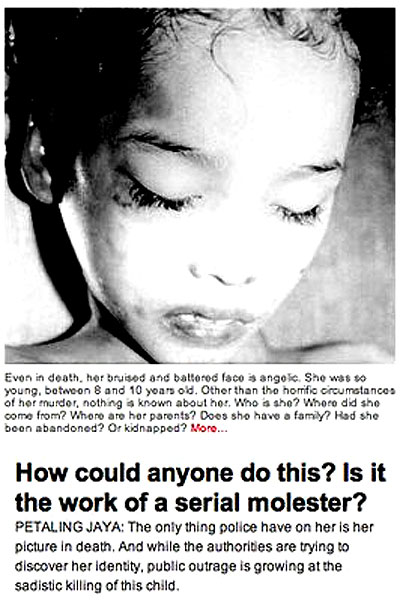 8 year old Nurin Jazlin’s body was found by a shop owner, naked, stuffed into a gym bag in the fetal position. She had been dead for over 6 hours before she was found.

A cucumber and brinjal (eggplant) were found stuffed inside of her which caused her rectum to rupture. A bacterial infection contributed to her death but ultimately her small body just could not take any more.

Nurin had gone to a wet market near her house in Section 1, Wangsa Maju, Kuala Lumpur to buy a hair clip on the night of August 20,  2007. A wet market is a market that sells fresh meat and produce.

Nurin’s parents did not initially identify the body of their daughter because of the changes the torture and death had caused to her physical appearance. Because her parents did not initially identify her the authorities thought that the child might have been a foreigner because she did not appear to have a scar that all children in Malaysia typically have. The scar would have been caused by the country’s mandatory vaccine to ward off tuberculosis.

That left Nurin’s parent’s to hope that their daughter was still alive however, after a DNA test was given the results confirmed that the dead child was in in fact Nurin Jazlin.

Back in 2007, the murder of Nurin was considered one of the most horrific murders in Malaysian history because the child had endured cruel and horrific acts of sexual torture. This killer wasn’t turned on so much by the the fact that Nurin was a child, it had more to do with the fact that she was helpless, she was unable to stop the torture.

The killer derived great pleasure through Nurin’s pain, if she cried or screamed, struggled, it gave this killer the pleasure he sought until she died.

On September 28th of that year federal agents descended upon a shop which they subsequently raided in Section 7, Shah Alam. They ended up arresting 4 men and 1 woman in connection with Nurin’s murder.

The woman was released immediately after questioning, but the men remained in police custody for a total of 7 days. They were eventually released because the police never had anything they could use to tie them to Nurin’s murder.

The police thought they had a break in the case on October 2nd after having arrested an Indonesian woman at a market in Nilai, Negeri Sembilan because when they confronted her she tried to swallow a SIM card she had with her. But the woman was set free and whatever was on the SIM card was lost.

The police had CCTV footage of the area where the gym bag with Nurin’s body had been found. They sent the footage to the FBI to enhance it and try to identify a suspect. They saw footage of a motorcyclist on September 16th around 1pm carrying a gym bag, presumably the same bag Nurin was found in. The rider left the bag in the exact same shop lot Nurin was found in.

What was odd however, is that investigators also saw footage from an hour later which showed a woman who seemed to be loitering around the the same lot, she was picked up by 3 men.

The enhanced footage still failed to reveal the face of the rider and his license plates.

The case has never been solved. During the 26 days she was missing, Nurin suffered insurmountable acts of sexual torture.

This is one of the most disturbing types of killers because you could be friends with an individual like this. They are charming, nice, they can hold down a job, they might be very attractive, they are intelligent. The point is, someone like this has desires so dark, they don’t normally share them with others, not even the slightest hint of those dark desires. So you would never know it.

But perhaps even more disturbing than merely being friends with an individual such as the the one who tortured and killed little Nurin is that, there is a market for this type of sexual torture against a child. A market that is also quite lucrative.

Children are taken and sought out for acts of sexual torture and some of those acts are so horrendous that the child dies which makes the video worth even more. Some in this world like that, they get off on it and so the market is a lucrative one.

More than likely, Nurin was abducted by an individual who was part of a bigger group. A group that makes video’s of children being sexually abused and tortured. Somewhere, there is a video of this little girl’s abuse and subsequent death.

It’s no wonder that investigators did not solve this case. Cases like this are at best difficult to crack, particularly if her abductor is part of a larger group.

What we do know is that this child endured some pretty severe sexual torture and someone recorded video of her torture and death.