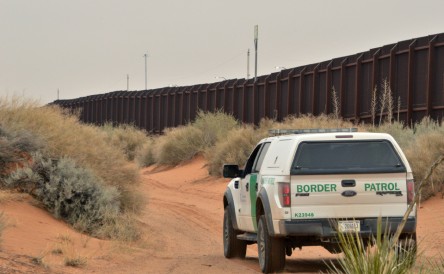 Now serving as the new and improved glorified Walmart greeter

Last Friday the VP of the National Border Patrol Council, Shawn Moran told Fox Business Network’s “Risk & Reward” that “The Border Patrol has been turned into glorified Walmart greeters, and unfortunately, we are not being allowed to do our job.”

He explained that the Department of Homeland Security likes to mess with the numbers by using complicated metrics and that the truth is they sometimes, maybe catch 1 out of 3 individuals who are trying to enter the country illegally.

But that isn’t all that he had to say. He went on to tell “Risk & Reward” that “the vast majority of the people that we encounter now end up walking out the front door of Border Patrol stations or even worse, they’re given money and bus tickets to go into the interior of the United States, and most of them will never show up for any type of immigration hearing.”

Shawn explained that agents are being restricted because of policy from doing their jobs effectively if at all.

But that didn’t stop these upstanding agents from breaking the law…so how can an agent follow policy if he can’t even begin to follow the law?

In South Padre Island, Texas what looked like a crab trap turned out to be a headless body. As it turned out Border Patrol Agent who Joel Luna, a 6 year Border Patrol veteran, was supposed to protect the country from drug trafficking and violence but his plan was to become a part of it.

Head over to Las Cruces, NM where you might find now former Border Patrol Agent Orlando Gomez who had sexual relationship with a girl that began when she was 15 years old. That “relationship” lasted a little over 2 years.

How about the Chicago Bound Border Patrol Agent who was arrested with 110 Pounds of Cocaine by the Arizona state police?

Agent Michael Roscover was arrested after he pulled out a gun and pointed it at a fellow motorist.

I guess if you are going to go around and call border patrol agents nothing more than Glorified Walmart Greeters, you can’t very well expect them to act like more than just that…Right?