In an interview with Time Donald Trump stated “I’ve done nothing to divide the country.” 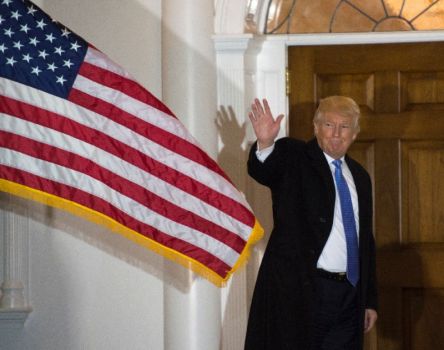 He is absolutely right about that, he has done nothing to divide our country, it was already divided and that divide was simply just buried under a rug.

We are responsible for the divide, we as in every American citizen in the United States today.

We are either part of the divide or have chosen to ignore it and do nothing to try to improve it. It is a choice each of us has made, Donald Trump did not decide that for us, he simply played on parts of it during his campaign.

He capitalized on that.

When I was growing up my dad was sort of a racist, it was the era that he was born into and needless to say, he was intolerant of certain races.

He is no longer that way because he made the choice not to be that way, just as someone who grew up in a home that is full of racism can choose at some point in life to walk away from that.

What Trump managed to do, whether it was planned or not, was that he was able to play into the parts of America that are deeply divided, such as racism, intolerance, sexism and the like because the numbers of American’s who share on those beliefs or types of beliefs is fairly high sadly, even in this day in age.

That is simple mathematics.

Behaviors are always chosen and they are usually driven by individual personal beliefs.

What Donald Trump is failing to realize is that his behaviors, what he has said, what he tweets and has tweeted, those words have power because they are part of behavior, part of his personal beliefs.

And because an entire world watched him get to where he is today, in the minds of many it cleared those ugly behaviors.

People no longer felt the need to hide being a racist, a bigot a sexist, they no longer had to hide the anger, resentment or ugly attitudes and behaviors.

Why? Because Donald Trump didn’t and now he will be the 45th President of the United States.

All of Trump’s words have a tremendous power, in fact back in 2015 journalist Megan Kelly received death threats after Donald released a wrath of nasty tweets directed at her over a question she asked him with regards to some sexist comments he had previously made about women.

He didn’t threaten her himself, but because of his vicious tweets to her and directed at her, other individuals felt that it was okay to openly threaten her life.

Donald trump has the ability to draw out the ugliest behaviors from people with nothing more than mere words because those individuals carry the very same ideals and beliefs that Trump has so enthusiastically spoken to during his campaign, through the use of words and behaviors.

So no, Donald Trump is not responsible for America the Divided because, the beliefs that divide us were already in place long before Donald Trump.

He was able to capitalize on those beliefs.

Regardless, he will be leading a very Divided America.

To start mending the divide, Trump has to own up to what he has created, in all honesty, it is a bit of a hateful monster at this stage.