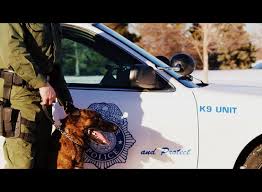 The K9 German Shepherd lost a piece of her ear and also recovered from other non-life threatening injuries and has since returned to duty.

The individual responsible for her injuries as it turns out happened to be her partner, one Thomas J. McKibben.

Thomas says that he inadvertently threw one of her toys underneath his vehicle, he ordered the dog into her kennel inside of the car, pulled forward not realizing that he did not secure the latch on her kennel so the dog happily jumped out to retrieve her beloved toy, thus getting hit by the vehicle, which happened back in December.

Thomas lost an entire vacation day and has subsequently been reassigned.

Thomas by the way happens to be the second officer to be disciplined this year for the mistreatment of an animal.

While it sounds as if he was negligent, I doubt that he purposely or negligently caused harm to his K9 partner, it seems as if this was purely an accident and not negligent at all.

That accident is one that anyone could have had, at anytime.

I am all for disciplining an officer who did something so as to cause blatant harm to another including his or her K9 partner, however, this was not blatant and was in fact, a complete accident.

I say this a lot but police are just like the rest of us. They make mistakes and sometimes they even make horrible mistakes.

We too often mistakenly put them upon a pedestal and our expectation is that they are better than we are in that, they are superior, mistake free and absolutely perfect compared to the rest of us.

Because of how we view the police, when an officer makes a mistake, they never seem to be able to escape it or live it down.

It really is all about perception, which sometimes needs a little tweaking when it comes to how society views police.