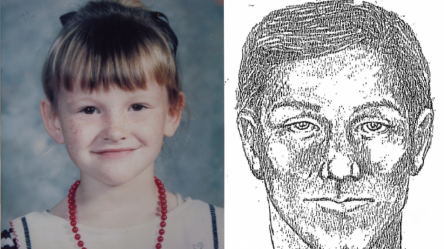 Back in the late 80’s it was not all that uncommon to let a 7 year old walk to the store by themselves. The world was a more trusting place, but that doesn’t mean that it was any safer, especially for 7 year old Cortney Clayton of Stamford, Texas.

On the night of September 2, 1988 at approximately 7:30pm, Cortney begged her father to allow or her to go to the store located roughly a half a block from her home to purchase a soft drink.

What is known is that she actually did make it to the store, she purchased the soft drink, came up short a few cents while paying for the drink, a stranger in line behind her offered to cover the cost of the drink but the clerk explained that she knew Cortney and let the girl walk out the front door.

After that, it wasn’t until 6 months later on Easter Sunday that the remains of Cortney Clayton were discovered by hunters, 50 miles south of her hometown of Stamford.

Within minutes of Cortney going to the store, her father had sent her older brother to go to the store so that he could walk his sister home. Her brother never found her or saw her. Her soda was sitting on the back bumper of the owner’s truck, but no other sign of Cortney could be found.

The town of Stamford, TX at the time had a population of about 3,500, and they never had kids go missing. So at the time this would have been quite an unusual case for them to try to sort out.

The police actually found a witness that they felt was credible, through hypnosis the witness was able to describe Cortney and a suspect. That suspect was described as a dark-complected male in his early 20’s.

The witness also described a car parked in front of the store. It had a white interior and was parked next to the store owner’s pickup truck. The witness had been driving to pick up her husband across the alley from the store. She also remembers seeing the car door open and a man leaning against the side of the building.

The suspect, the car, well they were never found sadly.

I am unsure about how I feel about the “witness” because she had been hypnotized. Sometimes even under hypnosis, suggestions can be given, other memories are confused with current situations and the like.

However, if we are to go off of the witness statement because it’s all that we have, it’s clear that Cortney was abducted by a stranger. This was not someone that she knew although many might suspect that is the case.

I do not believe that Cortney got into the car willingly, so her death could have been accidental, during the commission of trying to kidnap her, yet it was never inevitable.

This young man was always going to kidnap a child he was just waiting for the opportunity. Generally in killings such as this, you are looking at a guy who has in his past exhibited odd behaviors such as, animal torture and killing, peeping, even being accused of having touched, fondled or molested other children inappropriately as a child himself.

Cortney’s murder at the hands of this young man may have very well been his first, he wanted to know what it felt like to murder another human being. Because she was not hidden well or buried it tells me that he disposed of the body in a sloppy, quick fashion so he was pretty new to the killing game.

If I had to guess, I’d say it is highly possible that Cortney’s killer was not mid 20’s at all more like around the age of 20, if not more around 19 or a bit younger at the time of her murder.

Investigators still stand a decent chance of catching the guy though, the problem they may face is figuring out what town he is from, my hunch is he is fairly local, he was the type of young man that would not have stood out in a crowd, yet he did have behavioral problems as a child/teen and I am guessing his parents were not together for some, if not the majority of his childhood.

Just because it seems like a needle in the haystack doesn’t mean that the needle can’t still be found.