Could it be that Trump’s pick to head the FBI is just another James Comey type?

At the confirmation hearing today, Christopher A. Wray pledged to protect the bureau from political pressure.

His opening line: “My loyalty is to the Constitution and the rule of law.” Apparently in reference to Trump’s attempt to try to get James Comey to vow his loyalty to the newly elected president.

Christopher has also been quoted as stating  that the investigation into Russian election interference and possible links to Trump’s campaign was and is not a “witch hunt.”

When Christopher was asked about how he would respond should the president asked him to do something unlawful or unethical, he responded, “First I would try to talk him out of it, and if that failed, I would resign.”

He also stated that it would be highly unlikely that he, himself would meet with Trump privately one on one, which I would assume would be to protect and ensure the integrity of the FBI, boldly showing that Trump would not be able to compromise the FBI’s independence, you know that whole bit of not caving to political pressure and all, that one thing Trump attempted to get James Comey to do. 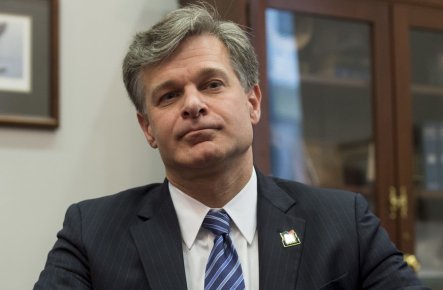 “You have to be able to stand firm to your principles”  Christopher was quoted as saying.

He might be a good chap after all, regardless the Democrats pushed him in every direction that they could just to make sure which I completely understand.

The President no matter how special he feels he is or how entitled he feels he should be, cannot have a yes man who has pledged his loyalty to the President serving as the director of the FBI.

The FBI must remain completely free and independent of political pressure and the head of the FBI must be loyal to the Constitution of the United States and the Rule of Law.

Who knows perhaps it was just lip service or he is a pretty okay chap.

Only time will tell to know that for sure.

Personally, I do not believe that anyone so far can touch James Comey in terms of truly understanding the delicate relationship between law enforcement and the communities that they serve.

He truly understood how law enforcement and communities really need to understand one another and work together in an effort to combat both crime and police brutality/corruption.

James took some pretty bold steps in an effort to understand that.