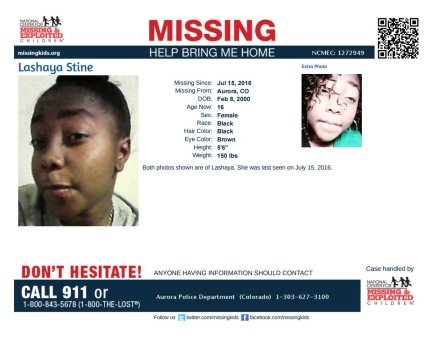 It’s been over a year now since Lashaya Stine went missing. She was last seen on July 15, 2016, and to this day no trace of her has been found.

At the time she went missing, Lashaya was 150 pounds and stood about 5’6-inches tall with long black hair, brown eyes and a quarter size round scar on her chest. She was 16 years of age. She used to wear a silver watch on her left wrist, although she would not be wearing it currently.

Lashaya was last seen 7/15/16 at 2:30 a.m. in the area of East Montview Boulevard and Peoria Street in northwest Aurora. She was scheduled for a job interview the next day, but she never arrived. She has also made no attempts to contact family or friends since her disappearance. According to a press release 5/25/17, authorities said that Lashaya may have lost weight and could be wearing a wig.

The area she went missing in is an area that is well known for both violent crime and prostitution in fact, back in March of this year an Aurora, Colorado Code Enforcement officer inadvertently recorded himself soliciting prostitutes in the area.

While Lashaya left home of her own accord, it does not appear that she intended on staying away from home for an extended period of time.

It’s important to remember that although sex trafficking is global, it can also strike at home and on multiple different levels.

Often times we see the following types of sex trafficking:

Both Pimp and Gang Controlled trafficking run their operations in similar ways and this is where one would most likely find the answer as to what happened to Lashaya. The only real difference between the two is that with pimp controlled, you typically report to one leader, whereas in gang controlled several individuals run the operation and the girls.

One has to ask the obvious question, why was she out at 2:30am? She was out to meet someone. And that someone was either a pimp or someone who is or was part of a gang geared at trafficking young women and girls, both willing or not.

The point is, that whoever she was out to meet, she trusted completely.

My gut says it’s not just lone pimp here but someone bigger and authorities would do better to focus their attention on finding the person Lashaya went to meet the morning she vanished. That individual is part of a larger organization and figuring out who that is will lead them to Lashaya.

It sounds so easy but it is not. These grang controlled trafficking rings are layers and layers of individuals, both young and old, both male and female, both local and not.

But you can always trace the point of missing backwards in an effort to find the source, always. We just fail to see that until it’s too late or a crime has finally been solved.