As we head into this holiday season, as many of you know, this is the time of year where I take a little extra time off from publishing to spend more time with those that I hold near and dear. The people who give me the time and space that I need to write almost non-stop while still holding down a full-time job.

I just couldn’t take the week off here without a look back at some of the worst Black Friday’s in the history of the U.S.

I worked retail in my youth and the holiday’s were a dreaded time of year for us, customers are horrible, the Christmas Music is non-stop which leads many retail workers despising any and all Holiday music.

The one thing however that I thankfully did not experience was the the worst Black Friday ever in the retail industry.

Back in 2008, when the recession was in full swing, people were hurt, angry and stores offered drastic discounts, because many experts predicted that due to the recession the holiday season would be met with lackluster consumer spending. The buying frenzy ensued in a dark way, which converged in a single moment that resulted in the death of a retail employee. 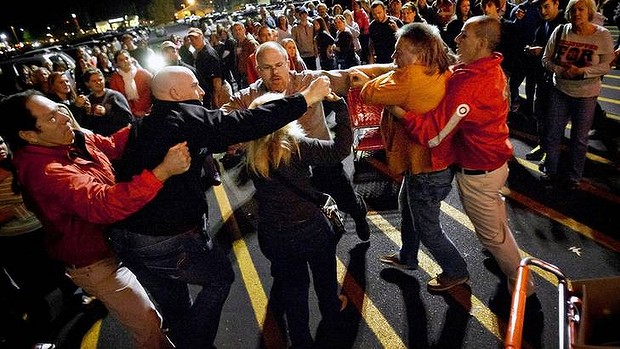 At the very same Wal-Mart a woman who was eight-months-pregnant miscarried her unborn child inside the store, more than likely due to the sheer chaos that was going on at the time inside the store.

At a West Virginia Target, Walter Vance was hitting some Black Friday deals when he collapsed and died inside the store. What makes this so terribly sad is that holiday shoppers decided in the spirit of the holidays to do absolutely nothing and stepped over and around his lifeless body in an effort to get the best deals.

At a Toy-R-US in Palm Desert, CA, two women got into some sort of altercation. While no one knew why these two women got into it, witnesses reported that it was a bloody brawl. It also didn’t stop at just that, the altercation happened to incite their male companions to pull out their hand-guns and shoot each other.

An off duty Kinston police officer was so hell bent on obtaining his Black Friday goods that he pepper sprayed several people in a crowd.

A New Boston Walmart became a nightmare for one little 11 year old girl who was trampled at the store by insane shoppers.

This one is one of the most terrible Black Friday stories I ever saw hit the news.

In Jackson, Tennessee, the day after Thanksgiving back in 2012 Akasha Adonis a transgender woman and her mom were assaulted by other shoppers as soon as store personnel unlocked the doors to a Kohl’s Department Store.
Akasha was hit by an assailant who pull out her hair and then proceeded to put his hand in her mouth and tore three teeth out of her socket, breaking her jaw.

If that doesn’t inspire many of you to just hit Amazon.com’s Black Friday deals I am not sure what will but you can find many haunting tales of Black Friday shoppers going completely insane over getting the best deals.

Personally, my plan is to lazily wake up on Black Friday, sip coffee and ease into the day and check out my bestie, Amazon.com for some sweet Black Friday deals.

Don’t get me wrong, I like to gamble some but never with my life and the thought of being trampled by a mob of Black Friday shoppers for some odd reason just does not do it for me.

For those brave souls that do head out, I wish you the best of luck finding those deals, just do everyone a favor, don’t let frustration and anger get the best of you.

Be kind to one another this Black Friday.