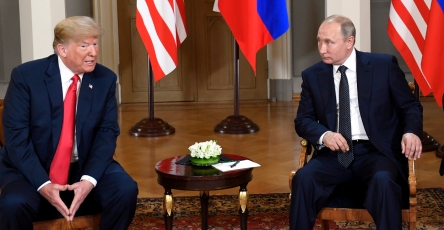 In rather delightful news today, the Trump Administration has announced the United States departure from the nuclear missile treaty with none other than Russia.

Some are speculating this might be the start of a new and improved nuclear arms race. In fact, some reports are stating this move might “kick-start” a new nuclear arms race, which if I am not mistaken has already started, long before the US backed out of the INF today.

Secretary of State Mike Pompeo said during this morning’s press conference that, “Russia has jeopardized United States security interests, and we can no longer be restricted by the treaty while Russia shamelessly violates it.”

Mike is not wrong either. Russia’s new nuclear-capable missile actually violates the 1987 INF that the country signed with the United States back in 1987.

Some would still argue that the US should have remained in the treaty and somehow attempted to talk Russia into behaving rather than misbehaving.

Whenever someone does that with me, my first move is to misbehave personally so, I doubt very much that Russia, knowing what we know about Russian President Vladimir Putin and Moscow, will shape up and play nice when Trump or his administration demand them to do so.

The mistake that Trump made here however, was that he failed to discuss this move with Europe prior to announcing it and that has started a bit of a novella throughout the world.

Additionally, now that the US has left the treaty, Russia is pretty much out of the dog house and in the clear so as to not abide by it which is leaving some to worry about a potential war in the long run because, by simply leaving the treaty, we no longer have any leverage with Russia.

Then again Russia as well as other foreign countries were already building up their nuclear capabilities up while at the same time disregarding the treaty.

So why would the US even stay in it, no one else is playing nice in the sandbox after all.

In a rare move, I actually agree with Trump and his Administration on this one. The US simply cannot remain part of a treaty with others where we are the only ones who are actually abiding by that treaty.