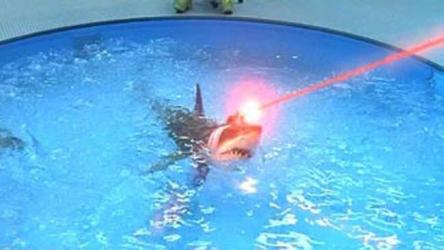 It’s starting too look a lot like an Austin Powers movie IRL these days, well that’s only after you realize Russia has actually taken the time to train whales to harass Norwegian ships. That’s right, a white whale in a harness is out and about harassing ships, although I am sure Russia is in the process of figuring out how to mount laser beams to sharks, for the time being they are using whales and other sea life.

Fishermen and scientists say a white whale wearing a strange harness that harassed boats in the Arctic recently may have been trained by Russia’s military and by the way Russia has in the past acknowledged that they have in fact developed a training program for sea mammals at their major military base near the territory of key NATO member Norway.

Word on the wire is that video exists of a video of a beluga whale swimming alongside a fishing vessel and repeatedly nudging it.

The harness was removed from the animal by a team from the Norwegian Director of Fisheries. Jørgen Ree Wiig, from the agency, said that the harness had a logo on it reading, “Equipment of St. Petersburg.” He described it the harness as having canvas straps which appeared slightly worn and there was visible rust on the metal screws holding the apparatus together.

Audun Rikardsen, a professor of marine biology at the Arctic University of Norway; “We know that in Russia they have had domestic whales in captivity and also that some of these have apparently been released, then they often seek out boats.”

Russia’s military has a history of trying to weaponize whales and other sea mammals, the Cold War-era Soviet Union had a program to train dolphins to help detect underwater weapons and alert their military trainers which ran until the 1990s.

Back in 2017, Russia’s TV Zvezda, which by the way is owned by the defense ministry in Moscow, aired a report on a Russian navy program to train beluga whales, seals and dolphins for similar purposes.

Over the past three years, President Vladimir Putin has reopened three former Soviet military bases along its vast Arctic coastline over a rather childish argument it is having with Nato so it’s is only natural to assume the offending whale was Russian military trained.

Not sure about the rest of you here but I am waiting for Russia to release sharks with laser beams attached to them.