Heading into another week in the year here, Colorado faced yet another school shooting on Tuesday, May 7, 2019, the shooting occurred at the charter school, STEM School in Highlands Ranch, a Denver suburb. Leaving 8 students injured and 1 dead.

The shooters, both students, on 18-year-old boy and one 16-year-old who identifies as a male.

The shooting created a media frenzy of misinformation, attention seeking individuals came forward to share stories and the like, one live broadcast near the shooting featured a “worried” parent on the phone with her child asking how many kids were shot conveniently while the cameras were rolling, some news reports are labeling one of the shooters a bully, it is all in such poor taste, in utter disgust I refused to read anything about it until last night. 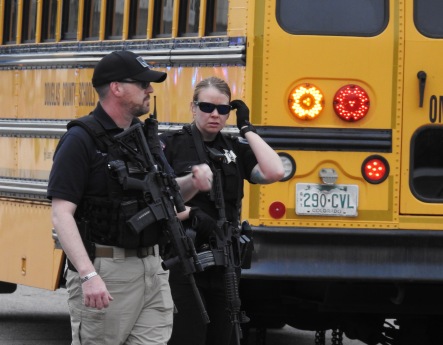 Students walked out of a vigil in protest of the politicians and politically driven speakers who turned the vigil into a very poorly thought out political stunt, geared towards getting whatever their personal politically message was out, but one rather disparaging item I kept seeing at several news sites were the comments.

Adults, making horrible, disparaging comments with regards to the shooters looks, lifestyles, calling them freaks, asking based off of the way they look, why they were not red flagged? Then getting into forum chat arguments amongst themselves over spanking kids, bully’s, the way kids these days dress, look or behave, calling each other names, demanding more gun laws, demanding less gun laws.

This is the behavior we pass along to our children for they are in fact mirrors of all of us. Where is the compassion or empathy for the two shooters? We lack the understanding of how or why they did what they did, who are we to really judge at this juncture?

Some would call me a bleeding heart, fair enough however I will always inevitably correct that, I am realist. The reality of the situation is that these two young individuals are suffering some mental health issues enough to have caused them to want to cause harm to others and until we understand fully what those issues are, we will not be able to stop school shootings regardless of how many gun laws we put on or off of the books. Words on paper are meaningless without a true understanding of the how and why.

What these two kids have done is completely inexcusable and wrong, however we have no inkling of what brought them to that point, what has caused them such mental trauma or were they just born that way?

We cannot stop mass shootings until we have a full and complete understanding of each shooter in any given situation because without that understanding, we will never truly be able to see any warning signs, red flags or indication that a shooting may happen.

Hindsight is always 20/20 however, we could certainly do a much better job of being compassionate enough to gain a true understanding of why so as to prevent it from actually happening again in addition to no longer allowing the mainstream media to turn these events into a ratings tool, putting attention seeking one minute wonders up where the focus is on that particular individual who simply wanted that one minute of fame. If they had some sort of valuable input it would be another matter now wouldn’t it.