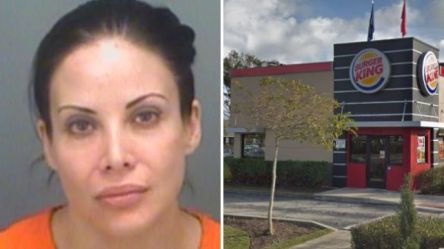 Ahhh, Florida, the state that brings you news stories such as “Florida Woman Arrested in Burger King Bathroom with Seven Syringes in Vagina,’ ‘Florida Woman Pulls Foot Long Alligator From Pants, ‘Florida Man Wields Dangerous Cookie,’ ‘Bryan Duane Stewart told his neighbor that he was going to “kill ‘em with kindness” shortly before attacking him with a machete with the word “kindness” written on it.” The list could just go on and on here, Florida is fairly proud of the fact that they can make the news with seemingly idiotic criminal behavior, not something I would be proud of as the Governor of that state but to each his own.

What’s more is that at times even the police in the State of Florida do some pretty questionable things such as arresting a man over a bumper sticker. 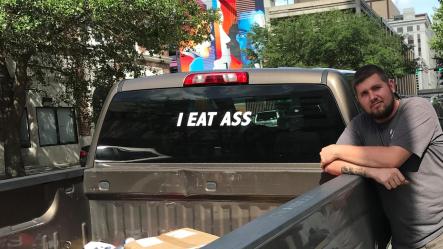 Recently, Dillon Shane Webb’s “I EAT ASS” sticker on his truck landed him squarely in jail. Naturally, he was quickly released, but he is now threatening to sue for the violation of his first amendment rights, which he is well within his rights to do.

Here’s how it played out-

Dillon was stopped by a Columbia County Sheriff’s Office deputy just west of Jacksonville, Florida. The officer’s dashcam footage reveals that deputy pulled Webb over for his “derogatory” sticker.

WEBB: How is that derogatory?

DEPUTY: How is it not derogatory? Some 10-year-old little kid sitting in the passenger seat of his momma’s vehicle looks over and sees ‘I EAT ASS’ and asks his mom what it means; how is she going to explain that?

WEBB: That’s the parent’s job, not my job.

The deputy goes on to argue that he wouldn’t want to have to explain the sticker to his kids, that Webb should remove a letter to transform ASS to AS, and that Webb was not only violating Florida’s obscene materials law but also was resisting an officer.

Wait a fucking minute here, Florida has an obscene materials law on the books? Are you kidding me? Have you seen what is walking around in just the Wal-Mart’s in Florida? That is obscene! Florida’s criminal activity headlines are mostly obscene, but you can’t have a bumper sticker that reads “I Eat Ass?” 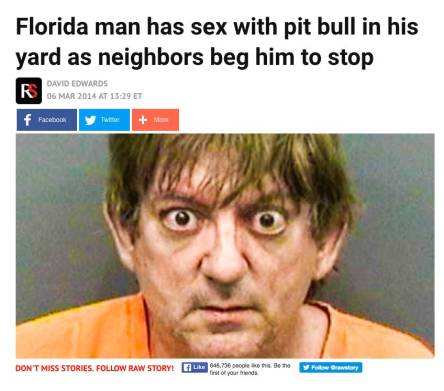 Thankfully the law is on Dillon’s side, a court notice shows that there is no law that says you can’t have bumper sticker proudly proclaiming that you eat ass.

And as for Dillon, well he is prepared to take the matter even further, Andrew Bonderud, Dillon’s attorney told Buzzfeed that they were considering raising some complaints against the sheriff’s office. Dillon had been arrested and unable to work after all, over what they argue is simply a free speech issue. 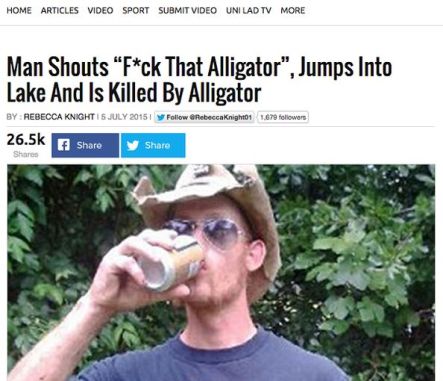 Either way, thanks to climate change soon enough Florida will be comfortably sitting at the bottom of the ocean so some of that closed-minded thinking will be going far, far away sooner rather than later.