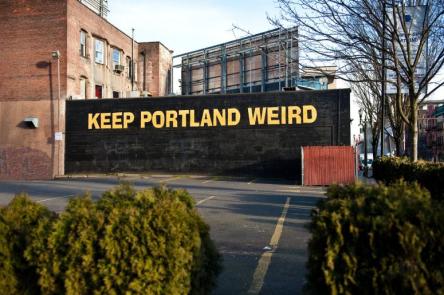 I am sure you’ve all heard the slogan “Keep Portland Weird,” if you have ever been to Portland you understand the slogan in its entirety this past week however things in Portland took an even more weird turn when a store manager was checking out some surveillance video and noticed someone popping out of a manhole from the sewer, maybe with the intent on doing a little midnight shopping?

The manager of the Chown Hardware store first looked at the video because he noticed a shoe was just sort of oddly out of place, yes you see it was in the street as opposed to being one someone’s foot. According to Kris Lake the store manager; “The manhole cover opens up and it’s like a clown car. Three people pop out, start undressing, swapping shirts around, trying to get whatever muck off of them.”

The Video shows an empty street at 10:44 p.m. then with no warning at all a manhole cover is pushed open from below and moved to the side. One person climbs out and is then followed by two additional individuals, each with flashlights. Two of them then close the manhole and then the trio is seen hanging around the area for another minute, during which one of them changes pants. All three of them then walk away and in true Disney Cinderella fashion, one of the three left a shoe behind.

Here’s where things get a little stranger, the manager of the store starts checking more video from prior nights and finds on 6/2, 5 individuals came out of the very same manhole to hang out and do a little midnight shopping.

Diane Dulken with the Portland Bureau of Environmental Services saw pictures from one of the videos and said what the people did was dangerous. According to Diane; “they would have been exposed to untreated sewage as well as low levels of oxygen. In addition to the safety hazards, and it’s against city code for them to be down there.” Which I doubt if they are actually living the city sewer they care about.

Diane said when crews from environmental services go into the sewers, they first send a sensor down to determine the oxygen levels and see if it’s safe for people. Then, they go down in a harness, so they can be pulled up if they get into trouble. Workers are also supplied fresh air through a scuba-type hose or with air exchanges.

Diane ended it by saying that the bureau now plans to send crews into that area to see if there’s any damage or vandalism.

Damage or vandalism? I see, I suppose that checking for any type of vandalism or damage in the sewer is much m or important than checking for oh, I don’t know any signs of actual people living in the bloody sewer?