US Citizens to Lawmakers – Stop Sleeping At the Wheel 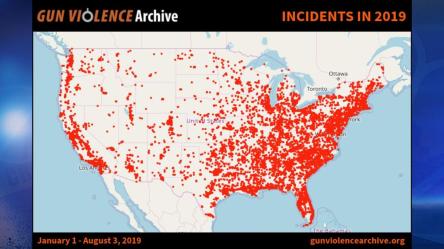 Pomfret, Maryland, El Paso Texas, Dayton Ohio just to name a few of the more recent deadly mass shootings. Each and act of domestic terror, one driven as his manifesto shows by nothing more than our very own president’s words of racial hatred and intolerance.

It is completely heartbreaking.

It’s time for the leaders of this nation including Donald Trump to wake up and stop sleeping at the wheel here, it’s time for every American to finally grasp the idea that just because you are an American, it does not afford you the right to own or have access to a gun.

Donald Trump is attempting to tie in gun legislation with immigration policy? Are you fucking kidding me? Trump’s ability to continually stir the pot of hatred in this country is precisely what enabled Russia to meddle, instills the ideology that it is okay to be a hatful racist, it clears the path to some of these shootings.

The government needs to take swift action and begin the process of implementing laws that are designed to protect our citizens, not laws aimed at rights to own guns, we need laws that allow for the government to obtain a court order and take guns away from those that they deem unstable. Sorry the but the facts are in front of us, and protecting the right to own a gun is an inbred, hillbilly inept way to look at things in this day and age.

Its time to stop voting for anyone who allows for the NRA to dump campaign money into a campaign so they can win, because those bed fellows are no longer tolerable.

Enough is enough, it’s time to do something.