In case you have not heard, last month a flamethrower attachment for a drone was released, causing the FAA to ask citizens to refrain from utilizing it. Apparently, the flamethrower allows a drone to spit fire up to 25 feet. 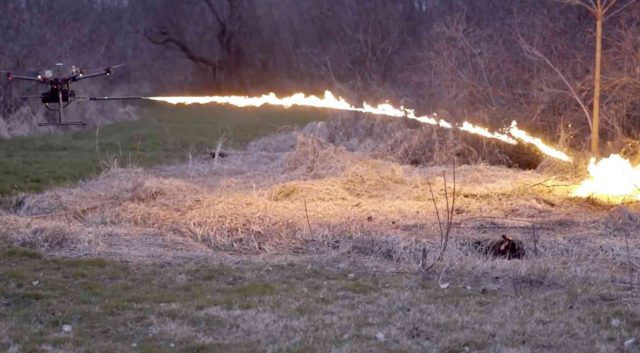 Last Thursday the FAA made quite the statement regarding the newly designed weapon of mass destruction by releasing a notice that called weapons and drones “a dangerous mix.”

The warning reads: “Perhaps you’ve seen online photos and videos of drones with attached guns, bombs, fireworks, flamethrowers, and other dangerous items, do not consider attaching any items such as these to a drone because operating a drone with such an item may result in significant harm to a person and to your bank account.”

Harm to your bank account? How about arrest maybe!?!?

Putting a flamethrower, or any “dangerous weapon” on a drone and flying the device violates Section 363 of the 2018 FAA Reauthorization Act, and could lead to penalties of $25,000, according to the FAA. But if a drone operator really needs to operate a weaponized drone, for whatever the reason, they can try to obtain a “specific authorization from the Administrator of the FAA to conduct the operation.

Under the law, a “dangerous weapon” is something “that is used for, or is readily capable of, causing death or serious bodily injury with the exception of a pocket knife. So, you could take someone’s eye out with a drone but you can’t start a fire with it.

In either case, keep your eyes on the sky for the new and improved, flamethrower drone and let us all hope that some gun rights nut, I mean enthusiast doesn’t figure out a way to mount an AR-15 to a drone and set that lose.