The Serpent and the Rainbow

One of my all time favorite horror classics is Wes Craven’s The Serpent and the Rainbow, it’s a perplexing take on an age old magic some say is dark, some say is not. Voodoo is more often than not associated with the art of dark magic, however it is a highly misunderstood religion by the masses and, technically speaking the true origins of the Voodoo are debatable and unknown to most everyone except for maybe those that practice the art.

Wade Davis claimed that he had discovered that secret Haitian societies used tetrodotoxin, a toxin found in puffer fish, to trick people into thinking they’d died and come back to life as zombies from Haitian folklore. Yet many other scientists denounced Davis’ claim as bunk. Tetrodotoxin expert C.Y. Kao, called it “a carefully planned, premeditated case of scientific fraud.”

Wade Davis’ real journey through Haiti introduced him to a type of black magic priest called a bucor. These bucors are said to possess the unique power of bringing the dead back as zombie slaves.

Wade Davis through his journey discovered Clairvius Narcisse, a supposedly real zombie, who had been feeling under the weather. Clairvius checked into a local hospital where upon arrival, Clairvius began experiencing a host of ailments including a fever, trouble breathing, and what he claimed were bugs crawling all over his skin. It wasn’t too long after that doctors pronounced him dead.

Clairvius was buried a few days later and everyone would have thought that to be the end of the story, until one sunny day in 1981 when Angelina Narcisse, Clairvius’ sister, saw him walking down the street looking very much alive and almost he same as he looked back in 1962, with the exception of the zombie like glow, not to mention that two American doctors had declared him dead back in 1962.

It is believed that a bucor can place an individual into a trance that can fool doctors into believing that they are dead. Once buried, the bucor dug up the body and sell them to as zombie slave labor.

Wade Davis believed this is precisely what happened to Clairvius.

Through his research, Wade believed that Clairvius was given tetrodotoxin powder through an abrasion on his skin. This powerful toxin from the pufferfish would have sent Clairvius into a comatose state which would have fooled doctors into believing he was dead.

In addition to the pufferfish toxin, Wade also found that Datura, a powerful hallucinogen (along with ground up human bone), were also common ingredients in zombie powder. Wade concluded that tetrodotoxin was key in causing a victim’s initial death, but it was Datura which produced the amnesia and delirium which maintained them as zombies for decades. 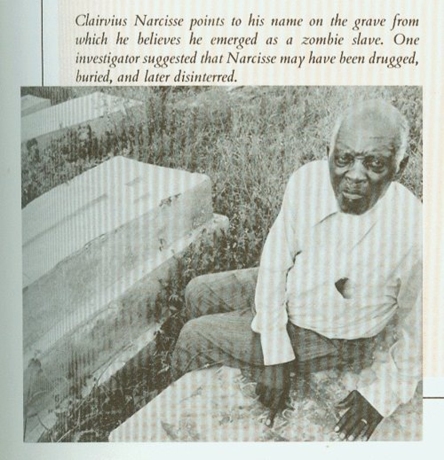 Whether or not you are a believer, it’s hard to argue the real life tale of Clairvius Narcisse, a man who died in 1962 who was discovered walking around his village in 1981 after hardly aging in the least.