Cop Deliberately Runs Man Over, Then Plants Gun on Him

Sgt. Wayne Jenkins, the leader of the Baltimore Police department’s now-defunct Gun Trace Task Force, called Former Baltimore Police Department Sgt. Keith Gladstone “in a panic” after running a man over with his vehicle. Yes, for obvious reasons neither man works for the department any longer.

Sgt. Wayne Jenkins seemed to be in a bit of a panic because he purposely ran over a suspect, so naturally he telephoned a coworker who encouraged and assisted with the cover up. The indictment which involves several officers says that Sgt Gladstone allegedly drove over to the scene, retrieved a BB gun from the trunk of his police vehicle and dropped it near a pickup truck where suspect was left lying on the ground after having been run over by Sgt Jenkins.

Let me see if I understand this, these officers who are trained professionals in the fine art of sniffing out a coverup, could not manage to coverup their own crime?

Other officers said they overheard Sgt. Gladstone tell Sgt. Jenkins, in the presence of another officer, to have someone search the pickup truck before he left the scene with a partner, according to the statement. He allegedly told the partner that he should say they were there for “scene security” if they were ever questioned by federal investigators.

“Based on a false statement of probable cause written by Sgt. Jenkins in another officer’s name, the suspect was subsequently charged with possession, use, and discharge of a gas or pellet gun, for the BB gun that Sgt. Gladstone planted at the scene of the suspects arrest, and a number of drug offenses.”

The indictment does not say exactly what the reasoning was behind the arrest of the suspect much less why exactly it was that Sgt. Jenkins purposely and without cause ran the suspect over however, Sgt. Jenkins was sentenced to 25 years in prison for multiple crimes, including drug dealing and robbery, as head of the department’s elite Gun Trace Task Force, a nine-member squad that allegedly spent years robbing citizens, extorting drug dealers and filing false reports, according to the U.S. attorney’s office.

Clearly this is a police department that has no idea how to coverup its own criminal activities so perhaps they should refrain from planting evidence, robbing people, selling drugs and the like.

This is a rather odd twist of fate for one Baltimore Police Officer and his fellow crew. It would seem that one Officer, Richard Pinheiro the use of body cameras could not have come at a worse time. And to make it even worse, the inability to actually know where the on/off button on said body camera is located, well that knowledge fell upon Richard way to late.

Police Body Camera’s tend to record things such as but not limited to:

They do that because the body cameras that police typically wear, well those actually do ‘record” things. Which I thought was obvious but I guess I was mistaken?!?

Richard, according to the video did try to turn it off but he actually ended up just muting the camera instead of shutting it off. Just a minor detail.

So in the January video footage from Richard Pinheiro’s own body camera, because he only muted his camera, it shows him planting evidence during an arrest. And if that were not bad enough, the case was actually scheduled for last week but was dropped because the public defender for the defendant requested to see the footage.

Forgive me here but wouldn’t a prosecutor review the actual evidence prior to actually oh, file actual charges and attempting to prosecute someone for a crime they really didn’t commit?

Do we no longer do that in this country, it’s just a free for all and hope that when someone is prosecuted he or she won’t have a proper defense thus gaining another notch in whatever prosecutors belt?

At least for Baltimore given last years disparaging report (August 2016), I am quite frankly shocked the prosecutor failed to look at the footage prior to bringing forth a case.

I’m sorry but if it were me, I’d be looking through that body camera footage for every case presented to me if I were the prosecutor, in Baltimore, to just make sure the cops didn’t make a mistake like PLANT EVIDENCE. But that is just me.

As a result of this case, because the officers involved are still witnesses in other active cases that are currently being pursued for prosecution in Baltimore City Circuit Court, Baltimore’s Office of the Public Defender is now, not surprisingly, demanding that dozens of cases, that Richard and his 2 illustrious colleagues were the arresting officers on, be dropped by the prosecutor’s office. 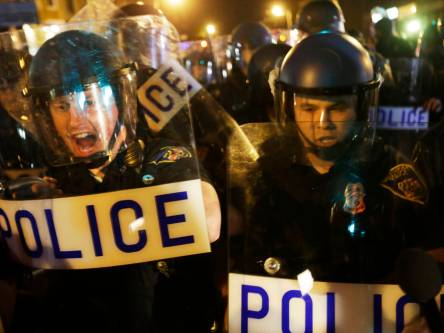 The Baltimore Police Department has had some pretty big issues surrounding police misconduct in the news for the past year if not longer. In fact in last years annual report the findings showed that the Baltimore police department had clear and ongoing issues surrounding police misconduct that ended up becoming national headlines.

One would think they might have learned after obtaining enough problems to fall into the national spotlight last year for bad behavior, but then again you know, not every crayon in the box is all that bright.