Today marks the first day in 25 years that teachers in Denver have taken to the streets to strike “If they don’t pay us, shut it down,” could be heard by teachers outside of South High School this morning.  The strike comes after more than a year of negotiations between the teacher’s union and the school district, that have focused on how to calculate base pay.

The strike will affect 71,000 students across 147 schools and as of 7am this morning, roughly half of the teachers had called in so that they could participate in the strike.

While stopping in for a coffee this morning people debating the teachers strike from both sides of the table had heated debates, some wondered where the states billions in marijuana sales tax revenue is going and why we are not using that to pay teachers a higher salary?

Either way you look at it and no matter which side you take, the answer to the problem is even more complicated than one would think. Teachers are crying out for livable wages, I understand that more than you could possibly know, yet the most obvious question is a relatively simple one; where is the money to pay teachers a livable wage going to come from?

Asking already cash strapped tax payers to pay more taxes is not the answer, pulling from the sales tax revenue from marijuana sales is a complexity all on its own and robbing Peter to pay Paul throughout the history of time has never worked, i.e. taking monies that were already designated for other programs. 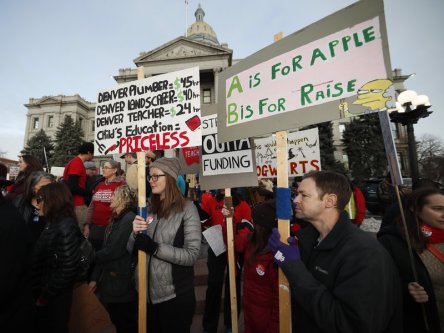 So, what is the answer?

Marijuana sales in Colorado exceeded $1 billion as of August of last year, in fiscal year 2017-2018, the Department of Revenue says it collected $250,968,890 in marijuana tax revenue.

The constitution requires the first $40 million in excise tax money go to school construction. Anything over that from the excise tax goes toward public-school funds. Overall, 47 percent of marijuana tax money went to schools for fiscal year 2017-2018, 41 percent went to other state services, and the remaining 12 percent would have gone to a general fund.

And I can tell you just driving around, we are building new schools while not paying teachers an actual livable wage, which is just the tip of one of the problems that we face. While it is nice to enjoy the look, the smell and design of a new building when those that work in it are not being paid adequately, it’s all for not.

The answer is a bitter pill if you will, it’s boils down to reallocating funding on a very long-term basis which means that we should be looking at putting less funding into things like, school admin, public transit, i.e. RTD and parks and recreation, which are nice to have’s, and useful but we have more important issues that require our attention and money.

We cannot always have everything that we want, for most we learned that lesson as children and it’s time we sucked it up and realized that now and reallocate money for the long term.