A new rumor heading out the door this weekend is that Donald Trump is beginning to worry about the possibility of facing impeachment hearings. 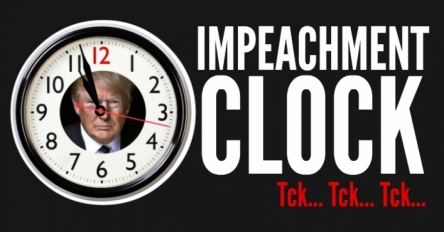 In absolute honesty, I am pretty shocked we have not yet crossed that bridge. Leaving Trump President is the equivalent of handing the keys to patients at an insane asylum.

In either case, on the eve of a brand new week, it’s starting to look a lot like impeachment hearings are more probable than ever.

And Trump is beginning to worry.

Some of the allegations against that are being levied against Trump were revealed through a sentencing memo written by federal prosecutors for the president’s ex-lawyer Michael Cohen.

In that document, references Trump as “Individual 1,” says that the president led the criminal conspiracy to pay off two women with whom he allegedly had extramarital affairs.

Which is in fact, cause for impeachment hearings into the conduct of one Donald J Trump.

Robert Mueller has been connecting the dots and has in fact found; obstruction intended to hide the truth about the Trump campaign, Trump, his business organization, and his family from the investigators and our nation.

Special Counsel Robert Mueller has been able to get indictments against 33 people in his ongoing investigations with regards to the Trump campaign and if they colluded with Russia in the 2016 presidential election.

No one however, has been charged for colluding with Russia, but various other crimes have been uncovered. Robert Mueller’s final report is expected soon, and word on the hill indicates that many politicians are suggesting that the president could be impeached, or even criminally indicted and jailed.

Let’s all just hope for number 2 here because that is the only way we’ll ever be able to take the mans Twitter account away.